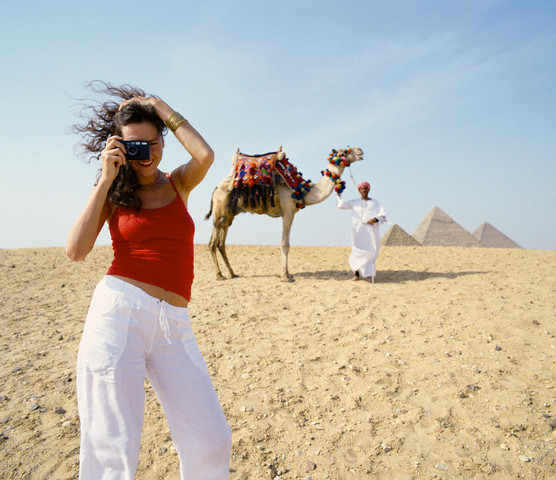 Day Trip to the Pyramids of Giza Itinerary:

Start your Pyramids of Giza & Felucca Ride Day Trip from the early morning our Egyptology tour guide will pick you up from your hotel by a modern air conditioned van and start your day by visiting The Pyramid of Khufu considered the greatest one.
It was originally 146 m (479 ft) high but now is actually 137 m (449 ft).
Was constructed by more than 2 million stone, and all with manual labor, then move to Pyramid of Khafre (Chephren) which is smaller than the Great Pyramid of Khufu (Cheops) and then visit the Pyramid of Menkaure (Mycerinus)
The Giza Pyramid of Menkaure (Mycerinus) is the smallest of the Giza Pyramids and stands just 62 m (203 ft) high (originally 66.5 m).
After that you will move to The Great Sphinx which dates from the time of Chephren human-headed lion.
Famous with the Egyptians as Abu el-Hol, the “Father of Terror.” In addition, the Greek name “Sphinx,” when translated, means “Strangler”…
Move to Valley Temple where the purification and perfection of mummification were performed on kings after that you will enjoy ridding felucca in the Nile for 02 hours (traditional boat on the Nile), finally your guide will escort you to your hotel.